In what’s arguably the biggest WoT Wednesday drop yet, Entertainment Weekly released an exclusive first look at The Wheel of Time, asking the question “Is The Wheel of Time TV’s next Game of Thrones?” In addition to exclusive stills by Jan Thijs featuring the main cast, the magazine article, written by Christian Holub, also contains basic information about the books and the plot for readers new to the series, and some quotes from showrunner Rafe Judkins costume designer, Isis Mussenden, and actress and producer Rosamund Pike.

Entertainment Weekly often releases promotional stories like these for upcoming shows — Game of Thrones is one such show that comes to mind. Keep in mind that these may not reflect final shots as seen in the television series. However, Weekly Wheel News was first to post that each photo contains metadata indicating the corresponding episode and scene. Without further adieu, let’s break down the photos one by one. Make sure to check visit Entertainment Weekly’s article for the high-resolution versions! 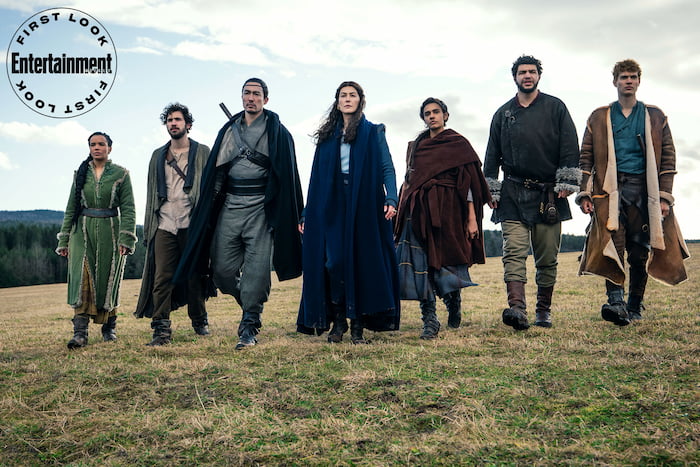 Metadata: “Wheel of Time” S01_106_D04 – 6/28 – EXT MEADOW/WAYGATE MOIRAINE arrives at the Waygate, met by LOIAL. And all the other. Who is the Dragon? This photo appears to be from episode 6, The Flame of Tar Valon, when the group meets Loial at a Waygate. 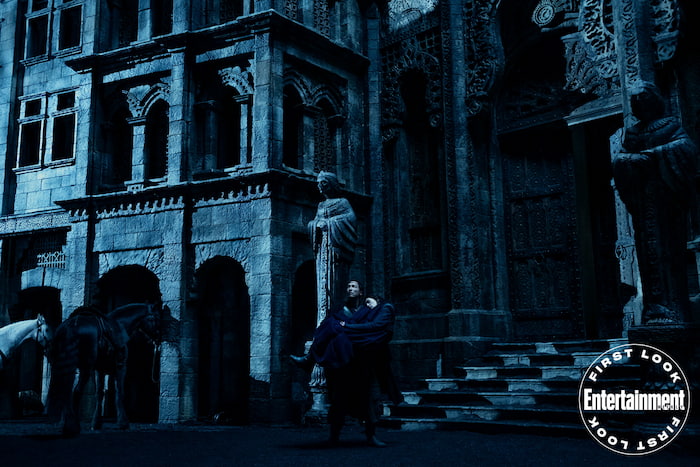 The second photo is of Lan carrying an injured Moiraine outside of Shadar Logoth. This photo also features Aldieb and Mandarb, both waiting patiently for their masters in the shadows of the abandoned city. The door in the background matches the one built for the church at Vysluni. This is our first good look at the city which, according to Rafe, they “literally built Shadar Logoth from scratch just for 15 minutes of air time, because it’s that important to the series.”

Metadata: “Wheel of Time” S01_Ep102_D17 – 2/38 – EXT SHADAR LOGOTH RUINS – TEMPLE LAN, with MOIRAINE exits Temple & races races down the street on his warhorse. Unsurprisingly, this is from Episode 2, Shadow’s Waiting. Nynaeve audition tapes hinted at Moiraine suffering an injury at Shadar Logoth, and Nynaeve catching up to the group shortly thereafter. 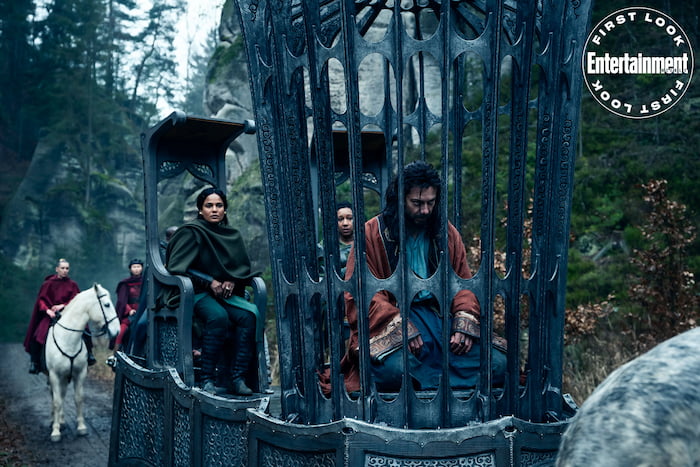 The third picture shows Logain (Álvaro Morte), Alanna (Priyanka Bose), and Kerene (Clare Perkins). Logain is captured, and being transported in a cage while Alanna and Kerene guard him, with two Aes Sedai of the Red Ajah riding behind them. Eagle eyed fans have spotted a great serpent ring on Alanna’s finger. This photo also confirms the long-running fan theory that Kerene Nagashi will be in the present timeline as one of Logain’s captors, rather than in a New Spring flashback.

Metadata: “Wheel of Time” S01_Ep103_D14 – 3/22 – EXT. CARALAIN PLAINS EGWENE and PERRIN see wagon tracks heading east, friend or foe? We suspect this photo may have the wrong metadata attached to it. “Caralain Plains” doesn’t fit the setting of the photo. Evidence also suggests Alvaro Morte and others were filming scenes in Ghealdan for Episode 4, implying Logain had not yet been captured. Our guess is this metadata actually refers to the scene when Perrin and Egwene meet the Tinkers. 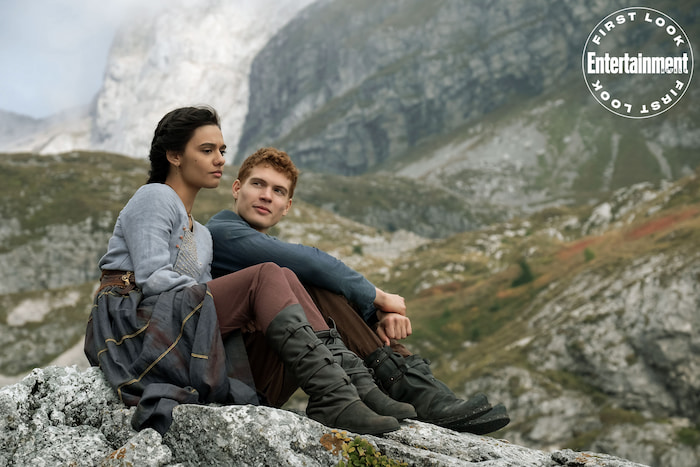 The final photo shows Rand and Egwene sitting together in the mountains. The background somewhat resembles the Mangart Saddle in Slovenia, where the production filmed for Block 1 in October, 2019. Rafe Judkins previously shared a photo of Josha Stradowski in the Mangart Saddle area. Given a number of Two Rivers scenes were apparently filmed in Slovenia, this is likely a scene from the first episode, before the group leaves with Moiraine and Lan.

Metadata: “Wheel of Time” S01_Ep101_D11- 1/24 EXT MOUNTAIN RIDGE EGWENE joins RAND. He knows what she’s going to do. This confirms the scene is from Episode 1. Audition tapes suggest Egwene is considering becoming Nynaeve’s apprentice, meaning she would leave Emond’s Field one day. Perhaps this is where she tells Rand.

Rafe Judkins’ comments, especially about building Shadar Logoth, give insight into the care and thought that has been put into the production, and these first looks have us wanting more. As a reminder, Rafe teased at Jordon Con that the first trailer for the show “should” be released before the end of summer. Fans have debated on what exactly the “end of summer” means, but it’s certain that with each passing day, our wait becomes a little shorter.

For fans wanting their own physical copy of these pictures, the September issue of Entertainment Weekly can be found on news stands this Friday, August 20th.