Showrunner Rafe Judkins did a Twitter Q&A after The Wheel of Time Origins panel at San Diego Comic Con 2022. Here are all the questions and answers (not in order, with some more revealing questions shifted closer to the top).

@Jared_McNeal3: Can you tell us how much you will be expanding on the forsaken in this season?

Rafe Judkins: It’s a big point of difference from the books in S2. We will spend more time with any Forsaken who’s in the show, more how the later books treat the Forsaken than necessarily Books 2 or 3 did

@GradeKangusBeef: favorite Season 2 two person scene with only the character names and no more

@MaggieMelchior: Since most of the main characters split up geographically at the beginning to tGH, will the next seasons keep them on parallel timelines for a convergence at Falme? In which case, the Portal Stones left a time gap of ~4 months for Rand’s group; easier to do on a page or on film?

Rafe: Time gaps are very difficult moving to the medium of television with the stories intercutting, but we try to do as much as we can to avoid one hour cross continent dragon flights

@dedicatedgrady: Is the Darkfriend Social gonna be in the show?

Rafe: THANK YOU. WHY IS NO ONE EVER GIVING HOPPER THE RESPECT HE DESERVES. OFFICIAL ANNOUNCEMENT: HOPPER IS IN S2

@memymomonkey: Any hints on Moiraine’s journey in season 2?

Rafe: It’s much expanded from her Book 2 story. But built out of the core of that and of a couple relationships that were not explored in the books

@marisavanzee: favourite type of gin, and also, can you drop a hint about something you’re looking forward to us seeing in season 2?

Rafe: Your pic makes me excited about where Liandrin’s character goes in S2. We are so so lucky to have the amazing @katefleetwood in the show and you will love, hate, and love to hate her LiLi

@memymomonkey: Any hints on Moiraine’s journey in season 2?

Rafe: It’s much expanded from her Book 2 story. But built out of the core of that and of a couple relationships that were not explored in the books

@Moonn1949: Did everything happen as planned this season or did you guys have to change anything (as in the last 2 eps of season 1)?

@crowz92: I have a cheat question about season 1. What was the biggest change in episode 8 that was brought by COVID restrictions compared to what you had originally planned?

Rafe: The thing I like the least was we originally had Egwene using the Wisdom skills she’d learned in the pilot from Nynaeve to help her after the channeling in Fal Dara. But last minute Covid changes on the day didn’t allow for the same amount of touching so it got switched and I [face melt emoji]

@crowz92: Will we see more than one of these cities in season 2? Cairhien, Tear, Falme

@mostlybree: Are you sticking with the fun cold opens?

Rafe: Yep! It’s our ode to the out of POV chapters in the books and we will always have them

@RodelIturalde1: Which books make it into season 2?

@WoTUp5: I have to ask. Gawyn (and I guess the lesser brother Galad) actually beat Mat in the warder training yard in the show right? Theres no way they lose on screen is there?

Rafe: This is an iconic scene from the book and we are building to a believable version of it in the show. Hopefully. Ha.

@Murck82: Will weaves appear the same in the coming season(s)? Congrats on S3 btw!

Rafe: They’re getting a bit of a revamp for S2. Threads and colors and bears oh my. But no bears.

@MassyTheSassy: First off, G&T is divine. Second, I want to know if you get more chances to expand the dialog more to let us see the characters better?

Rafe: We are always trying to. Lots of one on one scenes that didn’t get shot or didn’t make the cuts. But I’m always fighting for them, I think that’s where the characters really live or die, and our actors can always deliver when it’s just 2 people in a room talking

@KyleSucksAtThis: What was the scene you dreamed of bringing alive the most and have you filmed it yet?

Rafe: That scene is in the final episode of the show

Rafe: I think this moment will be in the first or second trailer of season 2. It lives rent free in my mind at all times

@Phntm888: How many episodes will@Season 2 be? If only 8 again, will they be longer?

Rafe: They are longer than first season, but yes, still only 8

@ghost_partea: Are the Whee of Times Origins cannon to the tv show or just a pretty (amazing) side piece where the stories of origins aren’t the mythology used in the show?

@Jpcjt1: which character had his plot changed the most compared to the books?

Rafe: Mat. But we try to bring the characters back to where they should be by the end of S2.

@lionesswisd0m: What is the journey like for Moiraine and Lan in season 2 with their bond still masked

Rafe: Another big departure point for us from the books is making much more story for Moiraine and Lan. We aren’t sitting these two amazing actors on the bench for a season, so we take what’s in Book 2 for them and expand it in a huge way. That’s all I can say.

@Heron__Marked: Why did you guys decide not to make the dagger instant death like the books? How did Loial survive being stabbed by *the* dagger?

Rafe: That’s a story best told in a stedding

@Jiguiski: Will there be a premiere where WoT youtubers will be invited to ask questions? I really like that for season 1, it was quite unique!

Rafe: I love having that! So here’s hoping

@perrintops: Will we get “Do you like to dance, Perrin Aybara”?

@CF_Golding: How far into the books will this season take us, know the EF5 are much more split up than EotW

Rafe: We are trying to get a fair amount of what’s done in Books 1-3 (large parts still being held for later) by the end of S2 so that S3 can be a much closer adaptation of TSR

@Ness_bytheloch: What new character/actor are you most excited to introduce us to?

Rafe: There are so many — Aviendha, Elayne, others that have been both announced but not announced, and of course Bayle Domon

@phiswiz: Do the Seanchan still use the ball gags on the Damane?

Rafe: I’ve never seen a ball gag on a damane

Rafe: Xelia is playing the role of knocking their scenes out of the fucking park every time they stepped on set.

@burns_science: Pretty sure I saw Uno in the behind the scenes – interested in how that is possible after last season…

@NinerAdvocate: Maybe you can open with an explanation of why you had the entire seanchan ever victorious navy unleash everything they had on a poor little girl on the beach, or how you had the forces of Fal Dara hard charging the BACK OF THEIR OWN DEFENSIVE FORTIFICATION.

Rafe: That girl had it coming. So did the entire coastline and all its cities

@newt5996: How much has the making of process changed in between seasons especially with how the pandemic affected season 1?

Rafe: It’s certainly affected us in ways both huge and small, but by the end of Season Two it had become so second nature that MULTIPLE TIMES I poured a coffee into my mask and was confused why it didn’t go into my mouth

Rafe: I love every character I write. I think you have to find a way to

@Graendal12: What’s your favourite scene with Donal Finn, and why is it him blowing the horn?

Rafe: #LetDonalToot is now the rallying cry of a generation

@Rapunzl347: Is Liandrin’s friend a <ahem> North Harbor friend, a Darkfriend, or both?

Rafe: I wouldn’t tell you even if you used a weave of compulsion

Rafe: @sarahenakamura is even correcting my book knowledge jokes. I hate it when she’s right. But that’s how she saves the show every day 💙

@mike_schaub: Does Mat get to wander the Tower practice yard, and do we learn of Jearom?

Rafe: Get your Origins on!!!

Rafe: Ask @joshastradowsk1 He should be growing them now 🙂

@Defenestr8edCow: Are we going to hear more about Moiraine’s dog, Jenny? A few of us had some theories that there may be more to that story…

Rafe: Please make @rammypark do an Origins episode about this

@SnoddyDaniel: How cool was it actually seeing a Fade nailed to a door? Did you pick up a hammer and help mount the fella?

Rafe: I genuinely loved it ha

@MeRavingMad: In comparison to season one, how much queer rep is there going to be?

Rafe: It depends on how many great memes you churn out.

@Moonn1949: Does Rand get his Red and Gold outfit this season? I can’t wait to see Josha officially in it

@JenIsgro: Will we finally see Steve?

Rafe: How does this only have one like. Most important question

@rafethompson: Can you confirm that people named Rafe from Utah are the best people?

Rafe: Another Rafe? Is this real life??

@RationalNerd: Are you aware that as the second RJ writer for WoT some parts of the fandom call you R2J2? 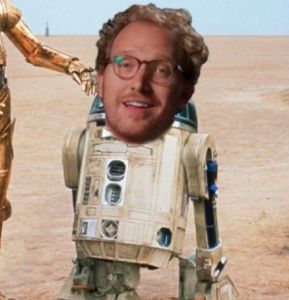 Rafe: No. But this is my best news of the week