Prime Video’s The Wheel of Time is no stranger to talent. In addition to Academy Award-winning lead Rosamund Pike, the first season had experienced and award-winning actors such as Kate Fleetwood, Michael McElhatton, Sophie Okonedo, Álvaro Morte, Maria Doyle Kennedy, Peter Franzén, and more. The second season is stacking the cast with even more talent. Most recently, we’ve discovered that Hayley Mills has been cast for season two of the fantasy series.

Hayley Mills began her acting career at the age of 12 in the movie Tiger Bay, for which she won a BAFTA for her performance. Her second role in Disney’s Pollyanna as the titular character rocketed her to stardom. She received a special Academy Award for the movie and then went on to star in The Parent Trap and four other Disney movies. After her time with the Walt Disney Company, Mills moved on to other movie, television, and theatre roles. Her career spans over 60 years and 50 credits, and she recently released a memoir of her teenage years in Hollywood titled Forever Young. 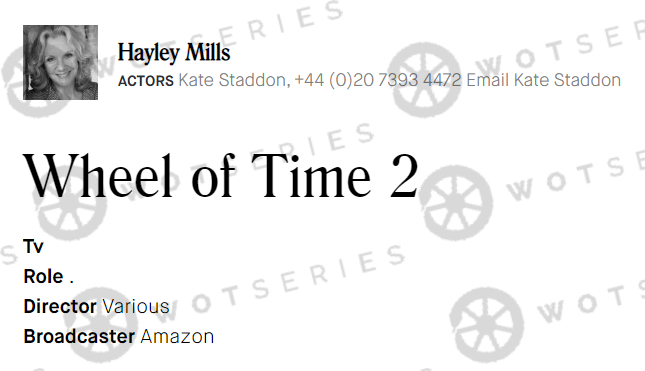 Mills’ CV was recently updated to include “The Wheel of Time 2,” however, there was no character name or directors listed, leaving her role unknown. We have reached out to Mills’ agency, but have not received a reply. As a reminder, until there is official word, this remains unconfirmed.

No matter her role, it’s very exciting to have Hayley Mills as part of the cast. What role do you think Mills might be playing? Let us know in the comments below!