The Wheel of Time recently filmed in the Alcázar at Segovia, Spain. With this shoot, new cast and crew have joined the production, and we can report the addition of four new actors, a new director, and a new cinematographer to the epic fantasy series.

The four new actors are Miguel Álvarez, Zeke Fernández, Brandy Rodríguez, and Rebecca Tanwen. Miguel Álvarez is a Spanish actor who has most recently appeared in the films “La venganza,” “Gasoline,” and “Fuera de juego.” Zeke Fernández is a Spanish actor who has appeared on television show “Todo por el juego.” Brandy Rodríguez is a stuntman and actor who has experience on many titles as a stunt performer including Amazon Prime’s “Hanna” and Netflix’s “Warrior Nun.” Rebecca Tanwen is an actor who has numerous stage credits and has also appeared in TV series “Mr. Selfridge,” “The Fear,” and “The Intern.”

Of these four, we currently only know the role of Miguel Álvarez. According to his CV, he will be playing the role of “Arthur King of Ghealdan.” We don’t know if this is the final name of his role or if it is a code name as seen in the case of other actors. In the books, Johanin was the name of the king of Ghealdan who stripped Logain of his titles.

We do not know the roles of Zeke Fernández, Brandy Rodríguez, and Rebecca Tanwen, but we can confirm that they were filming, along with Álvaro Morte. (Update, August 25, 2021: Brandy Rodríguez was added to the show’s IMDb page as a stunt performer.)

Also included in Miguel Álvarez’ CV was information that the Segovia shoot was directed by Spanish director Paco Cabezas, known for “Penny Dreadful,” “Into the Badlands,” and “American Gods.” According to this film slate shared by Paco Cabezas, it appears he was working alongside cinematographer Pablo Rosso. 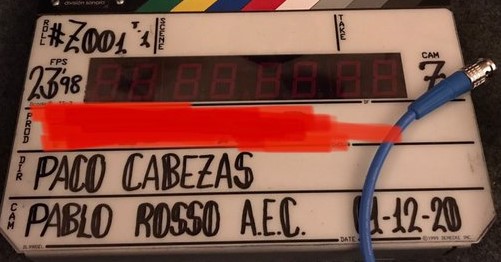 Paco was listed as the director alongside Wayne Yip, whom we know was the director for episodes 3 and 4 of season 1 of The Wheel of Time. This suggests that the scenes filmed in Segovia are part of that episode block and will supplement scenes already filmed by Wayne Yip.