Another Teaser on the Anniversary of The Eye of the World

In yet another widely-shared teaser, @WotOnPrime gave fans a taste of the look and feel of the much anticipated Wheel of Time adaptation. On the 31st anniversary of Robert Jordan’s The Eye of the World, the show’s official twitter account posted a 17-second video featuring showrunner Rafe Judkins discussing the first book in the Wheel of Time series.

The Eye of the World was not the beginning.

There are neither beginnings nor endings to the turning of The Wheel of Time.

Two Men and a Bridge

The first of the concept art pieces shows two men overlooking a valley with a body of water. This is most certainly Rand and Mat arriving at a village or town, possibly Whitebridge or Four Kings.

Video Description (3/7): As Rafe continues to talk, the video cuts to concept art of two men overlooking a valley. There appears to be a small encampment and bridge near the river below. pic.twitter.com/sqvvXWO1nq

In this photo, we clearly see Emond’s Field on Winternight. The Winespring Inn is in the background, with women dancing in the center while men look on.

Video Description (4/7): The next piece of concept art is a festival, with numerous lights adorning the town and women dancing in a circle as men look on. pic.twitter.com/kZKLNcAdM0

Video Description (5/7): From there, the video shows a group of wagons surrounding a campsite where people have built a fire. pic.twitter.com/yPaG4ATYkR

The next image shows seven riders crossing a small bridge running over a creek. Of the seven riders, three seem to be women with long hair. If the seven riders are Lan, Moiraine, Nynaeve, Egwene, Rand, Mat and Perrin, the this is unlikely the group departing the Two Rivers, as Nynaeve does not join them until later. There seems to be a tower in the distance, and if you look closely, there also appears to be a person on foot much farther ahead. This is possibly a scene of the group approaching Shadar Logoth, Shienar, or even the Tower of Ghenjei if the timeline was altered to exclude a meeting with Bayle Domon.

Video Description (6/7): The video then transitions to concept art of a group of riders on horseback, crossing a bridge over a stream. pic.twitter.com/lw4sQ0xe7o 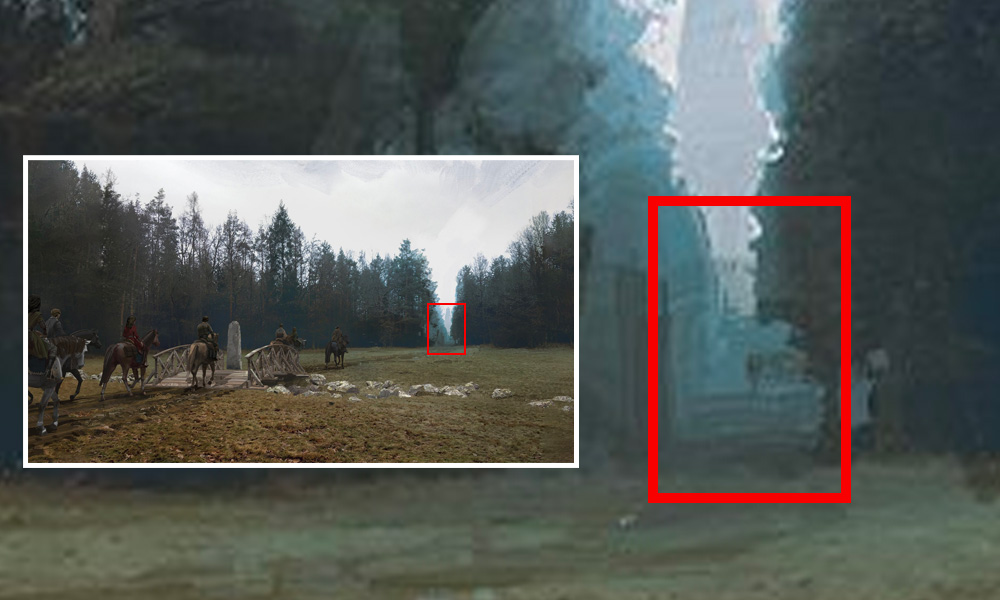 Most fans and observers are referring to this piece as Shadar Logoth or Aridhol, but the single rider gives us pause. Yet, we know of no other grand cities from The Eye of the World that would have this abandoned feel and engulfed in fog. Another possibility is that this is a scene with Rand in a Dream in Caemlyn or Tar Valon.

Video Description (7/7): It ends with concept art of a hooded rider on horseback in a deserted city covered by a pale white fog. pic.twitter.com/IccwpMFyq1

How Final Was This Concept Art?

It is important to note that not all of the concept art closely reflects actual sets from the show. During a livestream of The Dusty Wheel show on Youtube, showrunner Rafe Judkins jumped into the chat and answered a question about how closely the concept art reflects the final product:

“This is actually really early concept art from the process. There’s a couple of them that are very close to final product.”

But Rafe didn’t stop at answering the one question, and dropped this interesting nugget in chat as well:

Also, fun easter egg — first piece of concept art for the whole show?
Moiraine using the One Power! We hired about 15 amazing artists from around the world to just dig in on that idea of Moiraine and the One Power. And then see what it looked like, and did that for a fair amount of things

As to which two of the concept art pieces reflect actual production sets, our best guesses are Winternight and two men overlooking a valley. Winternight because we have seen many photos of Emond’s field (official and otherwise). Additionally, even though in the book Winternight itself takes place offscreen, we’ve been previously told by Rafe Judkins that we do in fact see Winternight onscreen.

As for the second, @GeekyEri had previously found a possible WoT filming location that appears to be the same valley we see in the one of the concept art pieces.

This is the same valley the two characters are overlooking, only from the other side.