Amazon’s @WOTonPrime official Twitter account released a photo of the set on day 1 of shooting, making this the first Wheel of Time Wednesday in some time:

A throwback to Day 1 on the #WOTonPrime set. Can you tell where we were? pic.twitter.com/WDTIiNfpI2

We’re going to call this a photo of Emond’s Field. This is confirmed by a Tweet show runner Rafe Judkins put out when the casting of Padan Fain was announced back in December of 2019:

Johann! He was actually the very first shot of the show, riding his cart into the Two Rivers. And the way he stepped off that cart and took in the town will make you smile and shiver simultaneously in the way only Padan Fain can. https://t.co/geEie24r7f

Notice how Rafe refers to the “first shot of the show” with Johann Meyers as Padan Fain “riding into the Two Rivers”. With the wagon clearly visible in the photo, and some townspeople sprinkled around (and some flowers), this makes the photo a shot of Emond’s Field, if they decide to call it that, since Rafe calls it the “Two Rivers”.

The following is a photo that’s been floating around WolfNets of the village we now see as released by Amazon: 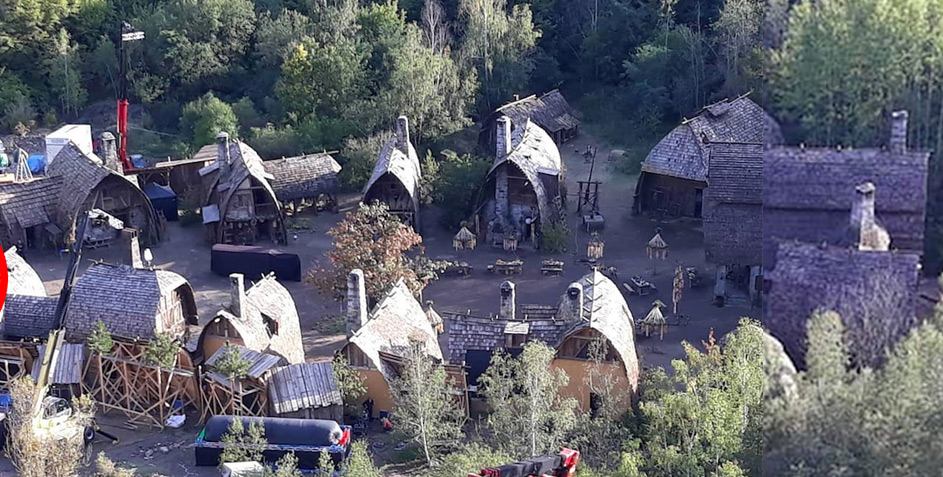 Notice the tables setup in the center of the village. Looks very much like what we see in the Amazon photo. Now here’s the photo above side-by-side with another shot of the same village:

Image “A” on the left is the first photo, presumably Emond’s Field before Winternight. Image “B” then is Emond’s Field after the Trolloc attack. Notice how the biggest structure in the village (circled in red) is completely gone in the second image. There’s rubble, the tables are gone, the tree has been burned. There’s only one village that we can think of that:

This is Emond’s Field or the Two Rivers.