Skip to content
Home/Filmka: Stunt Company Working on The Wheel of Time Show

Filmka: Stunt Company Working on The Wheel of Time Show

Filmka Stunt Team, a Czechia-based stunt company, recently listed the first season of The Wheel of Time on its website. Filmka has been around since the 1960s. They boast 100+ members on their stunt team and have 470+ film and TV credits to their name. They’ve recently done work for shows such as “Carnival Row” and “Das Boot”.

As to the filmography credit on their website, it lists two of the directors, Uta Briesewitz, Salli Richardson-Whitfield, and also lists Rosamund Pike, Daniel Henney and Hammed Animashaun for cast.

The “movie poster” style photo used on the website is not an official photo from the production, but rather a fan-made photoshopped piece featuring Pike and Henney as Moiraine and Lan. 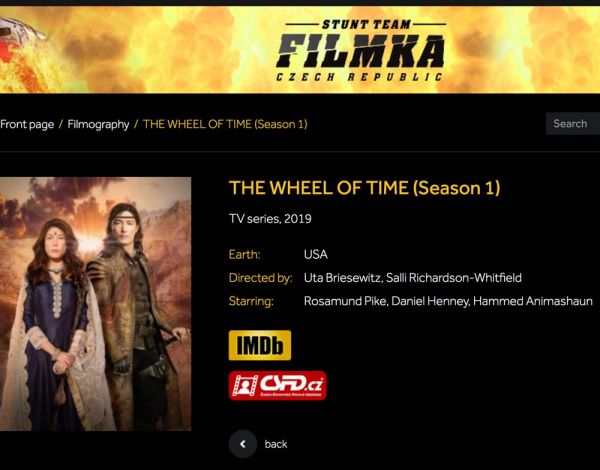 In an interview with ikun.cz, a Czech website dedicated to horses, Mr Ladislav Lahoda who leads Filmka mentioned the team’s work on The Wheel of Time. When asked about recent projects, Lahoda said that the biggest projects their team has been working on are Wheel Of Time, Carnival Row and Margrete.

Asked about the demands placed on acting horses, Mr Lahoda responded with the following (translated):

“The acting horse must be absolutely calm and reliable, it is often ridden by foreign stars. Most of these actors are represented by doubles, but certain shots and actions must be left by the actor himself. The horsemaster is then responsible for selecting horses, preparing horses and actors. and the realization of the event outdoors, often in the studio, who also decide which action the actor can go to and where it is necessary to use a double for safety reasons. It is often filmed in extreme environments, at night, using rain machines, clanging swords and riders and in historical projects, between explosions and night lighting of the site, it can be difficult for riders and especially horses. To do all this, the horse has to train, but the horse does not have to have its day, and then it’s up to the rider to handle the situation.”

We do know that Filmka has at the very least done horse-related stunt work on the show. Below is a photo of Madeleine Madden (Watcher of the Seals, the Flame of Tar Valon, always!) with best-boy-ever Archie, aka Bela, aka The Creator. Notice “Filmka” on the name plate 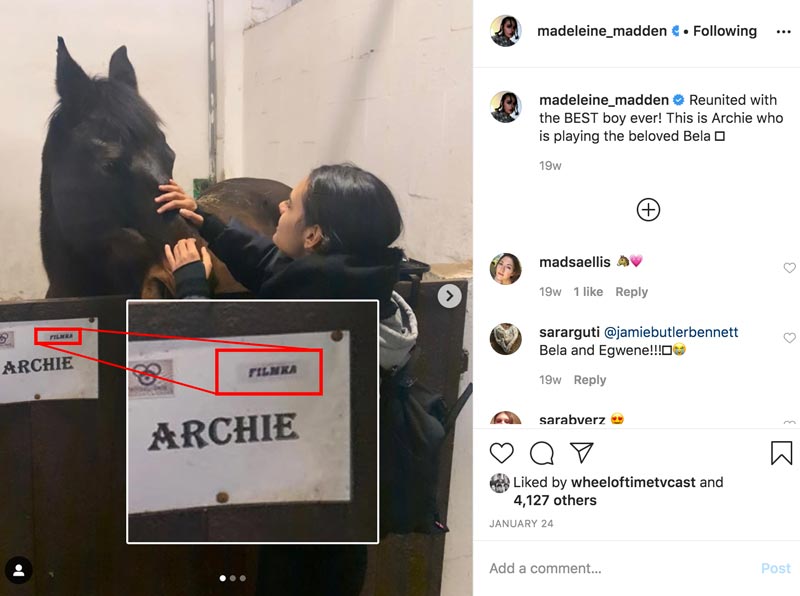 Reunited with the BEST boy ever! This is Archie who is playing the beloved Bela 🥰