Bentley Kalu Joins The Wheel of Time and Other Show News

Screen, theater and voice actor Bentley Kalu joined The Wheel of Time in an unknown recurring role, according to his resume. He has most recently appeared in the Showtime series Halo (2022), which also featured an appearance by Johann Myers who plays Padan Fain. Bentley was born in Britain and raised in North American where he studied acting at the University of Virginia.

At 6”5 with skill in combat, fencing, boxing and wrestling, Bentley can fit into a variety of roles in the show’s second season, such as a Seanchan fighter or nobility, Hero of the Horn, Tower Guard or even an Ogier.

WotSeries reached out to Bentley Kalu’s agency but received no response. As always, until we have official confirmation, we will categorize this casting as speculation.

In Other Show News

WotSeries speculation that Xelia Mendes-Jones joined season 2 has been confirmed in an exclusive story from Variety. The article mentions that Mendes-Jones “will also have a recurring role in Season 2 of ‘The Wheel of Time,'”. The actor shared the story in a post on their Instagram account which was commented by various cast members.

During the closing ceremonies of the first ever WoTCon, Amazon surprised fans in attendance with an exclusive look at two deleted scenes from season 1. The first deleted scene was a continuation of a scene between Egwene and Tam that made the cut. The scene takes place outside of the Winespring Inn where Egwene brings Tam breakfast. The deleted part of the scene features a conversation about Rand’s mother, where Tam implores Egwene to be gentle with Rand if she were to break off their relationship. The second deleted scene, which the show later released publicly, featured a more iconic scene that appeared in the trailer, showing Egwene emerge from a pool of water with the colors of the Ajahs covering her head and face. The scene showed part of Egwene’s Women’s Circle ceremony in the sacred pool, which preceded her push into the river. 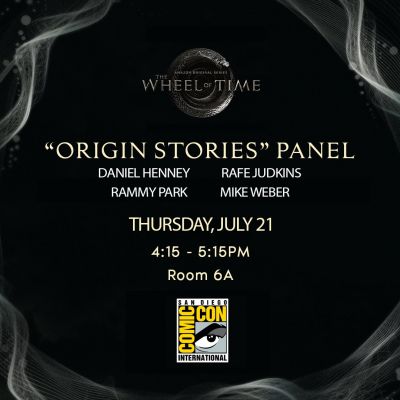 The Wheel of Time will be at the San Diego Comic Con in person this year with a panel focused on The Wheel of Time Origins. There to discuss the animated short will be show star Daniel Henney, showrunner Rafe Judkins, writer Rammy Park and producer Mike Webb.

In an Instagram story, Judkins said “This comic con is all LOTR and GoT, so we’ve got a fan-focused WoT panel with some cool bits
for you on Thursday :)”.

Writer Rammy Park also teased some sort of announcement in her Instagram Story: “Can you even with our surprise guests [Rafe Judkins and Daniel Henney]?? We must have something fun to share…”

The panel description promises an “exclusive special video presentation”. Have an idea about what else the panel will announce or share? Leave us a comment below!