The number of cast and crew listed on The Wheel of Time on Prime’s IMDb page has slowly been growing over time, and recent additions reveal new details about filming locations and which episodes those locations might appear in. It’s important to note that information on IMDb can be contributed by anyone with an IMDb account and as such may not be entirely accurate. With that in mind, though, let’s examine some of the latest changes and what they might tell us about the show.

The most interesting addition is that of Ales Belak, a steadicam operator for a splinter unit in Croatia. It was first reported on June 25, 2019 by KFTV that the TV series would be filming in Prague, Slovenia, and Croatia, but this is the first evidence we’ve seen that filming in Croatia has been completed.  A splinter unit is “a small part of the main filming unit that branches off to get alternate shots” (Nevada Film Office), so the presence of a splinter unit would suggest that more crew was also filming at the same time as part of the main unit. Per his IMDb page, Ales worked on episodes 1 (Leavetaking) and 2 (Shadow’s Waiting), though, again, this should be taken with a grain of salt until there’s further supporting evidence.

We currently do not know when or where filming in Croatia was completed.

Recently, we reported about filming in Segovia, Spain, and that the scenes shot there would be part of episodes 3 or 4. Now, thanks to recent additions to IMDb, it seems that those scenes will appear specifically in episode 4, The Dragon Reborn.

Two Spanish crew — Marc Fàbrega and Gabi Garcia — have The Dragon Reborn specified on their IMDb pages. As a reminder, we know that Álvaro Morte, who plays the role of Logain, and Miguel Alvarez, playing the role of the King of Ghealdan were filming in Segovia.

Finally, we know from numerous news articles that the show filmed in Slovenia in October of 2019. Four Slovenian crew — Goran Fabrio, Lenart Kranjc, Jernej Perko, and Milos Sluga Jr. — all have one episode, Leavetaking, on their IMDb page. 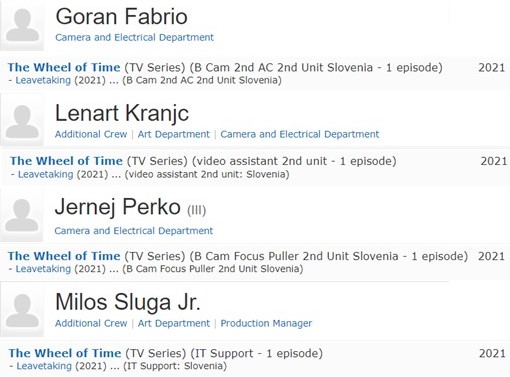 We learned last week that a scene involving Egwene, Nynaeve, and the Women’s Circle was filmed in Slovenia, and October 2, 2019, Rafe Judkins tweeted that he had been “in the mountains watching Moiraine, Lan and some kids from the Two Rivers race their horses across a river.” Piecing all this information together, it appears that Slovenia is being used as the setting for The Two Rivers.

What do you think of these locations? Is there anywhere in Croatia you hope the show filmed? Let us know!