The first teaser trailer for The Wheel of Time brought us nearly two minutes of new footage to get excited over. Within that new footage, a number of scenes actually were very familiar, thanks to leaked audition tapes and scenes. In this article, I’ll break down which parts of the teaser trailer can be traced back to previous knowledge gleaned from various leaked sources. (Edit, September 3, 2:50 pm CST: Added two more items that I missed. 5:20 pm CST: Added one more item)

Though much of what is discussed is conjecture, be warned that there may be heavy spoilers ahead! 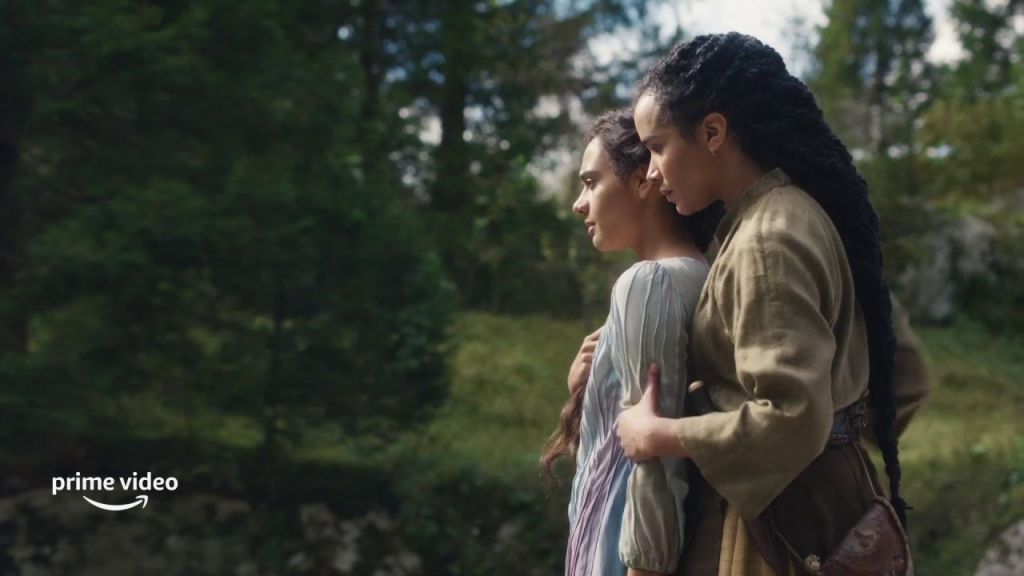 The teaser trailer opens with Nynaeve (Zoë Robins) pushing an unprepared Egwene (Madeleine Madden) into the river below after bidding her to “Be strong.” This scene immediately called to mind our report from January 2021 that there would be some sort of ritual scene involving Nynaeve, Egwene, and the women’s circle. Later in the trailer, we see the same rushing river (filmed at the Soča river in Slovenia), and Egwene finding the calm needed to float on her back with the current. This is most likely a continuation of the scene after Nynaeve pushed her in. Fun fact, Madeleine Madden, revealed on Twitter that it was actually her being pushed off of that cliff, not a stunt person.

And yes, I was actually pushed off a 12m cliff#wheeloftime #egwenealvere 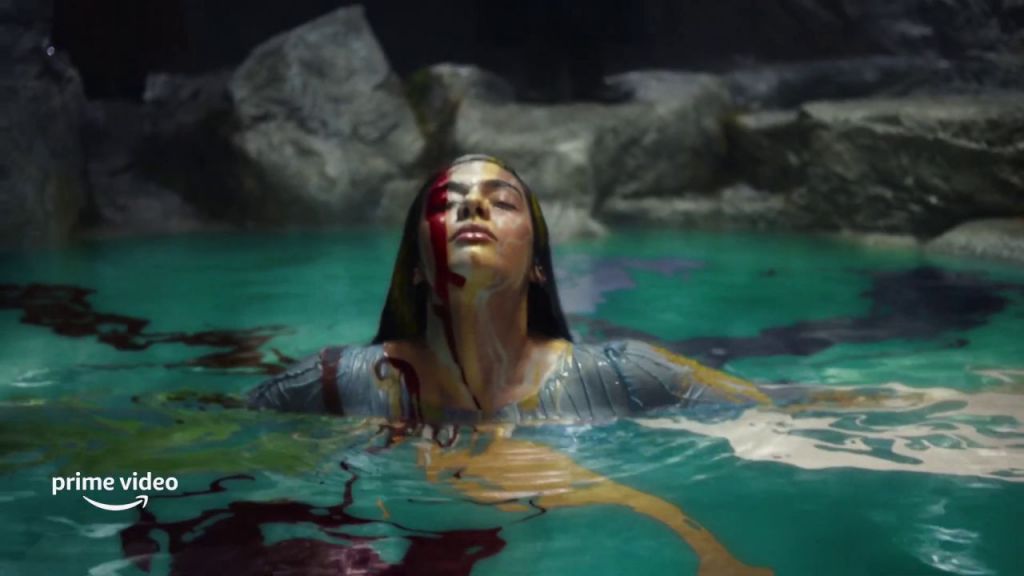 Later in the trailer, there’s another scene with Egwene coming out of a pool of water, seven colors — red, yellow, white, blue, gray, brown and green — of a paint-like substance coating her skin and clothing. Her hair is unbraided in this scene, which makes me guess that it might be an earlier part of the above ritual that a young Emond’s Field woman goes through before having her hair braided. In fact, if you rewatch the opening scene, you can just make out what looks like the remnants of different colors on Egwene’s dress, which looks to be the same dress she’s wearing in this colorful scene.

Dicing With the Boys 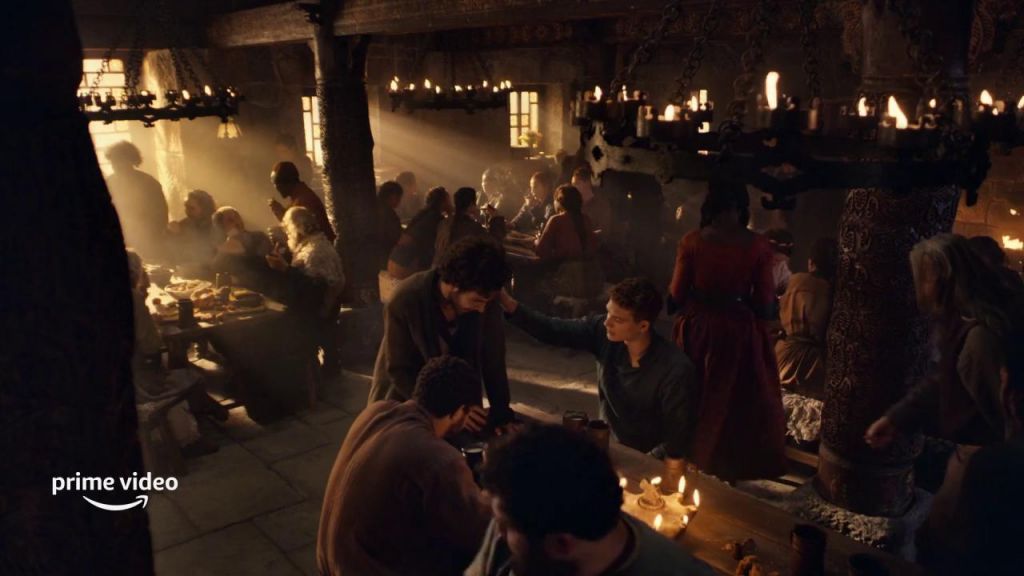 Our next scene is in Emond’s Field, in what appears to be a bustling Winespring Inn. Our trio, Rand, Perrin, and Mat are at one table together. Mat can be seen dicing briefly, and Rand reaches out to touch his shoulder.

In one of the scenes in previously uncovered Mat audition tapes, Mat was dicing with Rand, Perrin, and an unidentified woman. In that scene, Mat actually loses his roll, and he’s consoled by one of his friends, “You’ll get it next time”. Given how Rand seems to almost be consoling Mat by patting him on the shoulder, the scene pictured in the teaser could be the audition scene. It’s also likely, given Mat’s propensity for gambling, that he dices — and loses — more than once on screen. 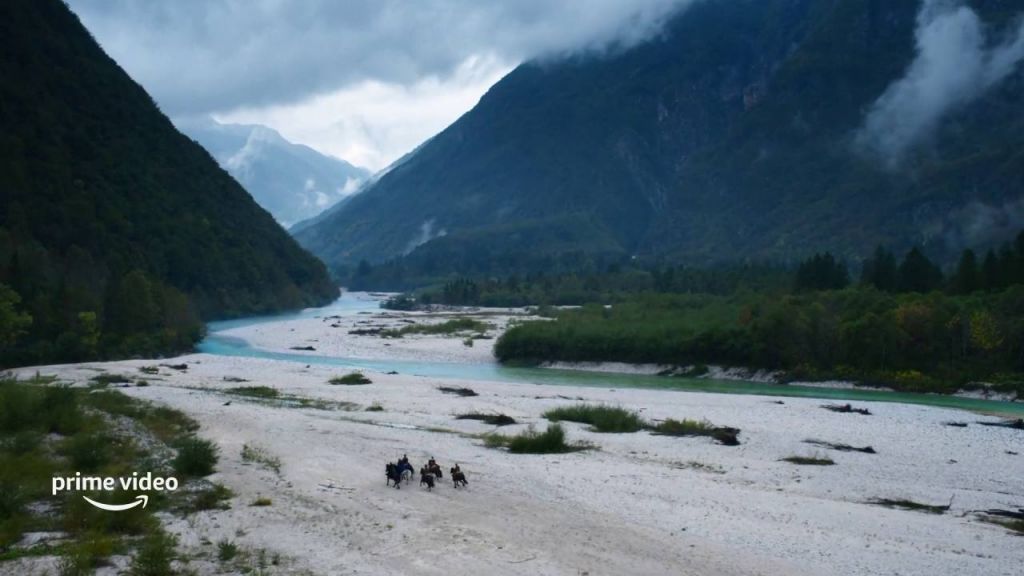 At 15 seconds into the trailer, we see a wide shot of six people on horseback galloping along the sandy edge of a river. This was likely filmed in the Čezsoča of Slovenia, and sounds very familiar to this tweet from Rafe Judkins back in October 2, 2019, where he said:

Amazon just released some glimpses of our incredible cast reading the first two eps of #TheWheelofTime and I would’ve posted it sooner but I was in the mountains watching Moiraine, Lan and some kids from the Two Rivers race their horses across a river.

It seems that the scenes filmed in Slovenia were set in the Two Rivers area, so our guess is that this scene is of Moiraine (Rosamund Pike), Lan (Daniel Henney), Rand (Josha Stradowski), Perrin (Marcus Rutherford), Mat (Barney Harris), and Egwene racing away from Emond’s Field. 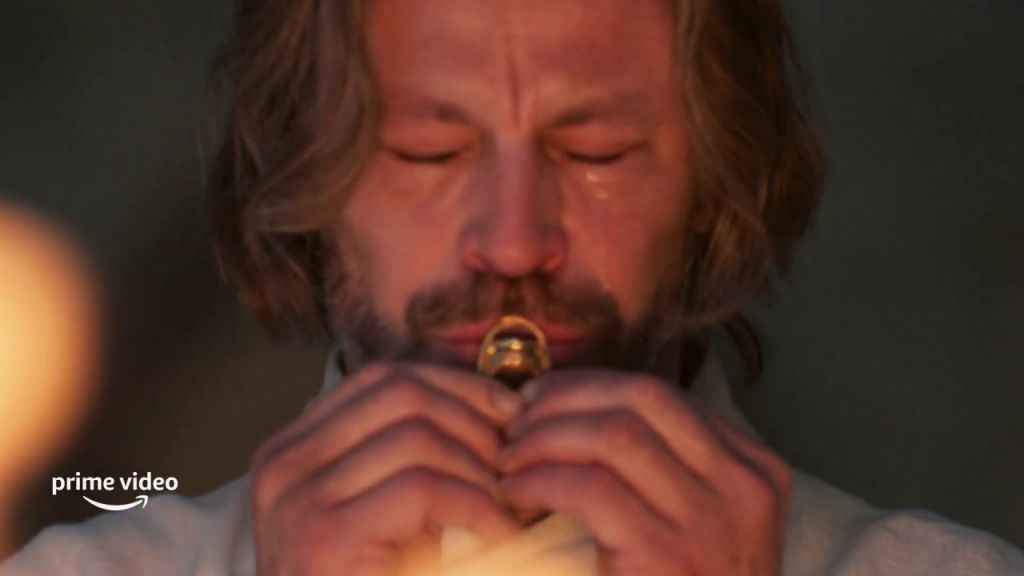 The next scene is that of Stepin (Peter Franzen), warder to Kerene Nagashi (Clare Perkins), holding a Great Serpent ring reverently and kissing it while a tear falls down his cheek. He appears to be dressed in white, the color of mourning. I theorized in my Block 2 Breakdown video that Kerene Nagashi, a character from New Spring, would be brought into the current timeline, and that she would die while her warder lived. 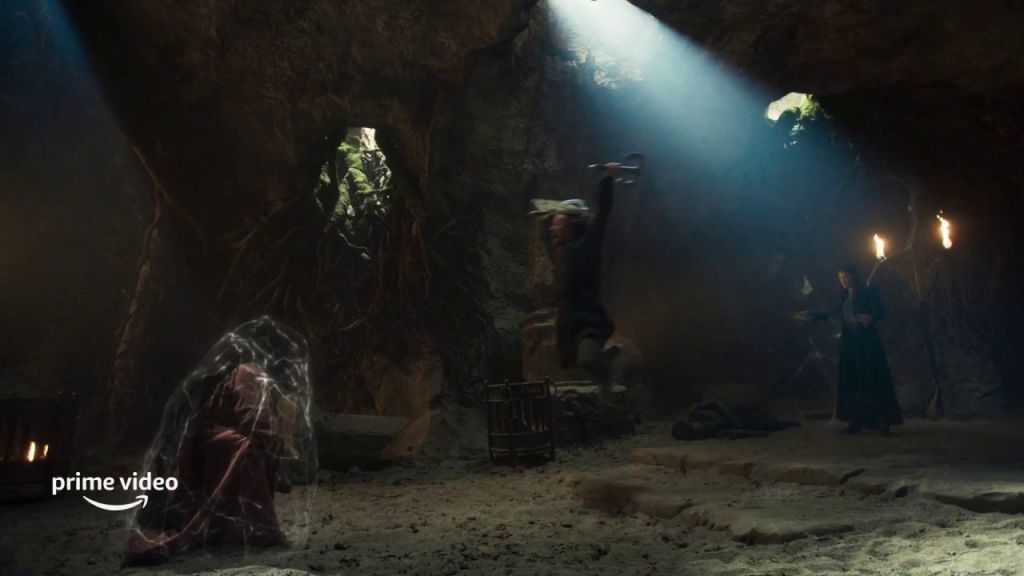 Later on in the teaser, we can see Kerene being throwing against a stone pillar after an attack from Logain, and we then see her body lying on the ground while Stepin furiously attacks Logain. It appears that this may be how she dies. While Stepin immediately goes into a rage, he seems to survive it long enough to bid a final farewell to his Aes Sedai.

At about 37 seconds into the teaser trailer, we get a glimpse of the Hall of the Tower. Assembled there are 3 Sitters for each Ajah except Green — which has 2 Sitters — Moiraine, Liandrin (Kate Fleetwood), and Alanna (Priyanka Bose), three additional Red sisters, two additional Green sisters, and Leane (Jennifer Cheon Garcia). Later, we see that Siuan Sanche (Sophie Okonedo) also joins the assembly, and if I’m doing my math correctly, that adds up to 30 Aes Sedai.

Thanks to all of the incredible women on the Wheel of Time, both in front of the camera and behind it. Had the honor of standing on set this week in a room of 30 actresses with Oscar, Emmy, Tony and Golden Globe nominations and wins between them, shooting a scene for an episode written by @jusjuel and directed by @sallirichwhit on a show I would never have done unless the #1 woman in my life, my mom, had read these books with me so many years ago. Thank you all for everything you do, and everything you’ve had to do and fight against to get to where you are that I’ll never even know about.

Unless there’s another scene with 30 actresses, this means that the scene in the Hall of the Tower is from episode 6, The Flame of Tar Valon. Our theory is that this scene is some sort of trial for Logain, though Logain himself is not visible.

Next, we see a scene of Moiraine being healed by Kerene Nagashi. We’ve seen three prior hints that Moiraine will take at least one major injury. The first, chronologically, is from Entertainment Weekly’s First Look images. One of the images was of Lan carrying Moiraine in Shadar Logoth, and in it, Moiraine looks either injured or exhausted.

The second hint, also chronologically, comes from the Nynaeve audition tapes. When Nynaeve confronts Lan after catching up to them after the group has been separated — presumably at Shadar Logoth — Lan tells her that Moiraine was wounded and points out that, as a healer, Nynaeve can help her.

Finally, in one of the Liandrin audition sides, it’s hard to spot, but one Aes Sedai says to another “You used your strength to heal me. Let me share the burden.” While it was difficult to guess which line belonged to which Aes Sedai from the audition tape, we can now guess that it’s Moiraine speaking to Kerene.

Around 49 seconds into the teaser, there is a scene where Alanna and her warders are under attack. With them is Nynaeve and Lan. This is further confirmation from those Liandrin audition tapes that the group of Aes Sedai that capture Logain run into Moiraine, Lan, and Nynaeve.

Later, we can see that Moiraine and Kerene are not visible in this exact scene. Perhaps this is because Kerene is healing Moiraine at the same time?

Aiel in a Cage? 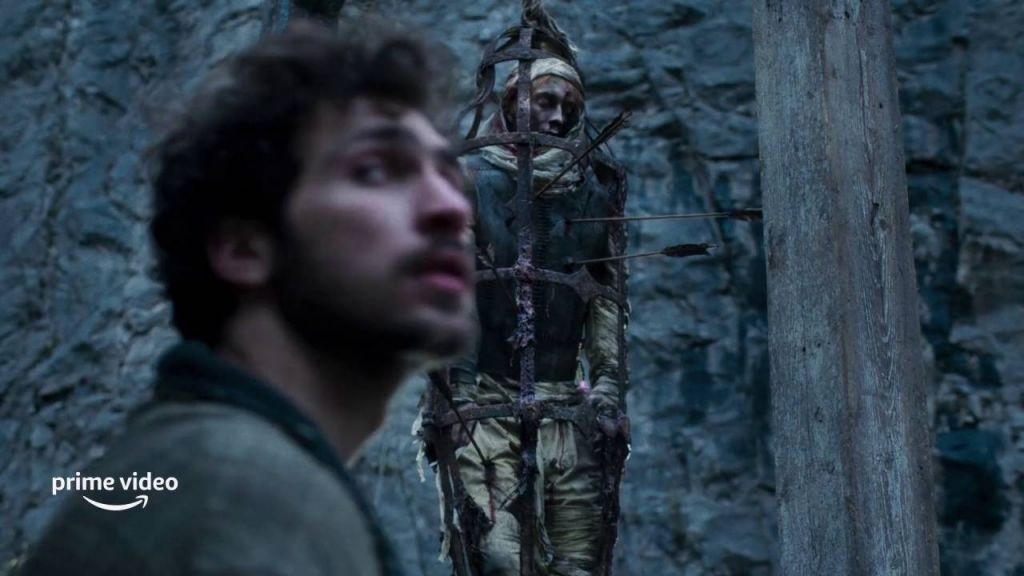 At a minute and 4 seconds in, we see Mat in front of a body in a cage, the body pierced with arrows. Eagle eyed fans have noticed that the body looks to have been an Aiel warrior, red hair is visible beneath a shoufa type headwrapping. Rafe said in his March 2020 AMA that we will see one Aiel in season one (other than Rand), and that that Aiel would “shock us.” Considering most fan theories have involved Aiel living on screen, if this is our mystery Aiel, it may be a shocking appearance, indeed! 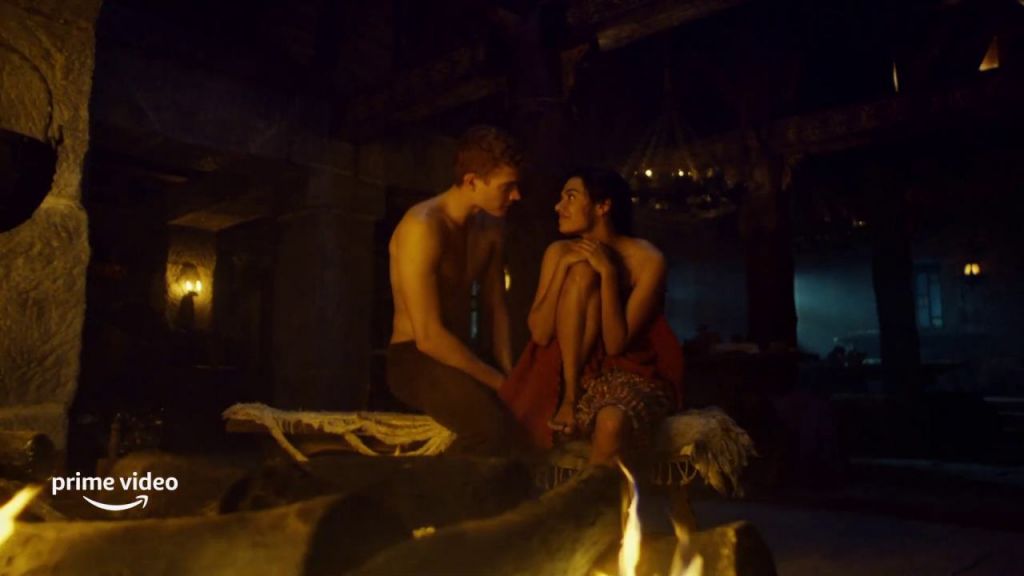 At a minute and eight seconds in, there is an intimate scene between Rand and Egwene in what appears to be the main room of the Winespring Inn. This recalls to mind the scene that appeared in audition scenes for both Rand and Egwene: the two of them talking about an event Egwene isn’t supposed to talk about (perhaps the ceremony mentioned above?) and also the revelation that Nynave has asked Egwene to be her apprentice. 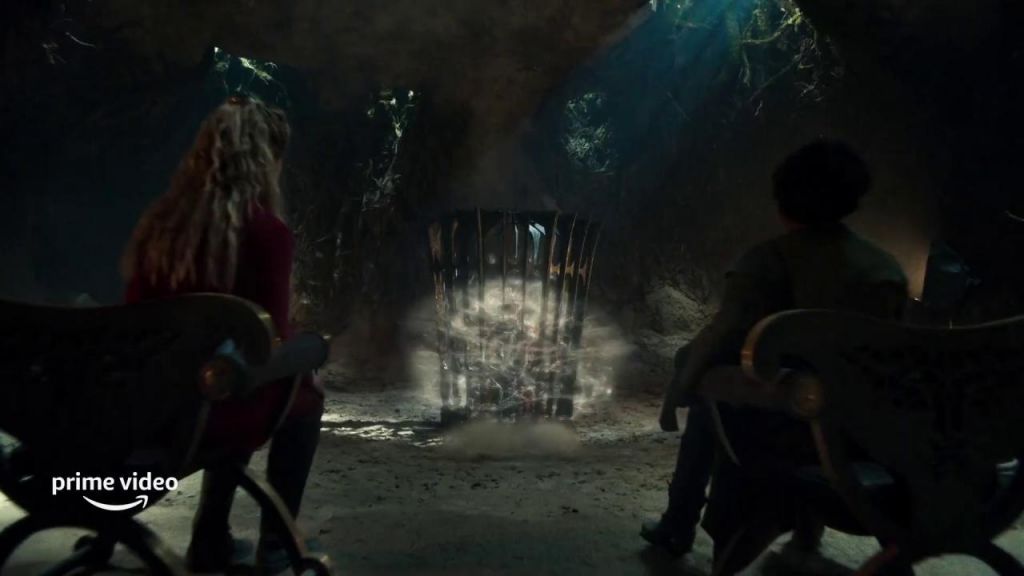 We talked about the scene in which Logain breaks free already, but one thing we spotted harkens back to both a Liandrin audition scene and the Entertainment Weekly first look. Right before Logain breaks free, Liandrin and Kerene sit in front of his cage, watching him. Similarly, we saw that Alanna and Kerene were seated near Logain’s cage while transporting him.

Very briefly in one of Liandrin audition scenes, it’s mentioned that the Aes Sedai take “shifts” guarding Logain, with one Liandrin quipping to another Aes Sedai, “Well, I don’t want do my shifts with [Moiraine].” It appears the Aes Sedai need to take turns guarding Logain around the clock in teams of two and that Moiraine will join in on this duty when she, Lan, and Nynave join up with the other group of Aes Sedai.

The Dark One is Coming for Your Friends 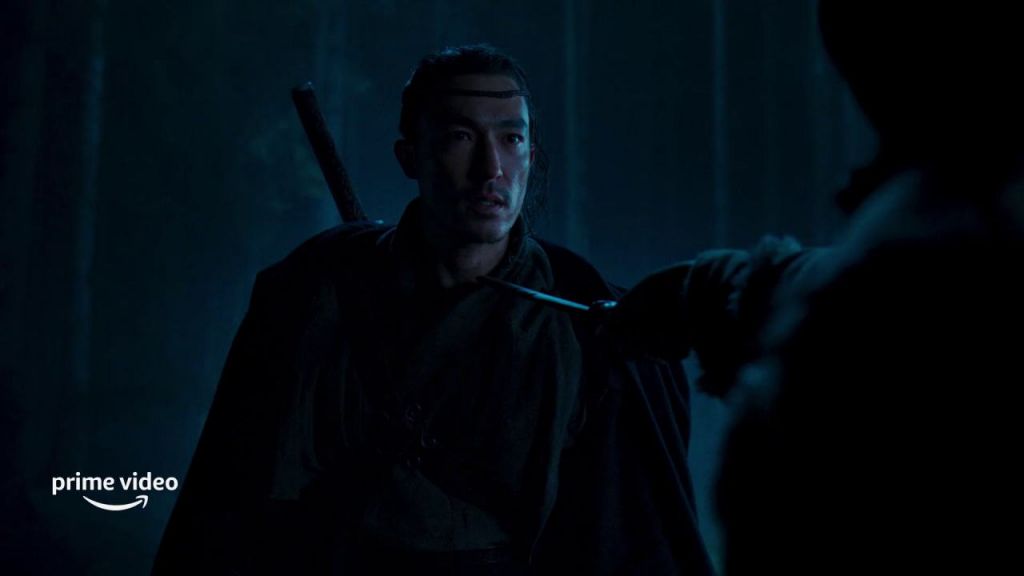 In a blink and you’ll miss it scene at the minute and sixteen second mark, we see Lan being held at sword point by someone with a very thick braid. The dialogue at this point is Lan saying “The Dark One is coming for your friends.” This is almost word for word from the Nynaeve audition scene in which she first catches up to Lan referenced up above.

First Glimpse of a Loyal Friend 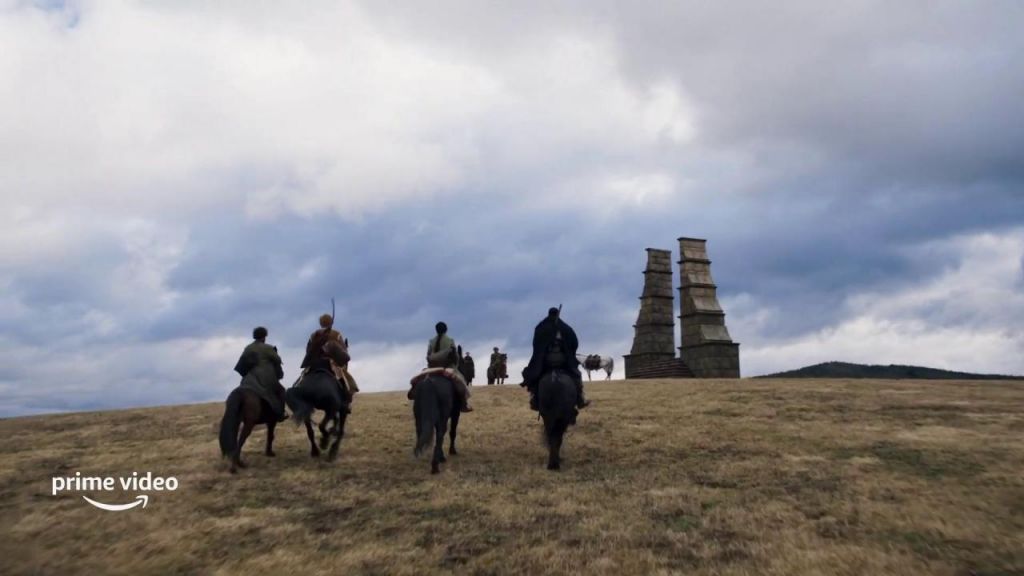 Finally, at a minute and thirty four seconds, we see Mat, Rand, Nynave, and Lan racing towards the Waygate on horseback. Waiting for them are Perrin, Egwene, Moiraine, and what appears to be our first glimpse of Loial (Hammed Animashaun). We knew from the metadata from one of the Entertainment Weekly first look images that the group would be meeting Loial at the Waygate.

We tried getting Hammed to confirm if that was indeed Loial, but unfortunately, it looks like we’ll have to wait to hear more.

Finally, while this isn’t something we see, per se, in the teaser, it does seem that all the scenes we can identify are likely from episodes one through six. As Rafe has confirmed more than once, the first season is eight episodes long, but episodes seven and eight — filmed after the production had to shut down due to the pandemic — remain the most secretive of all the episodes. With at least one more full trailer coming, perhaps we can look forward to some glimpses of characters and scenes from those final two episodes.

Moiraine Stepping Into the Winespring 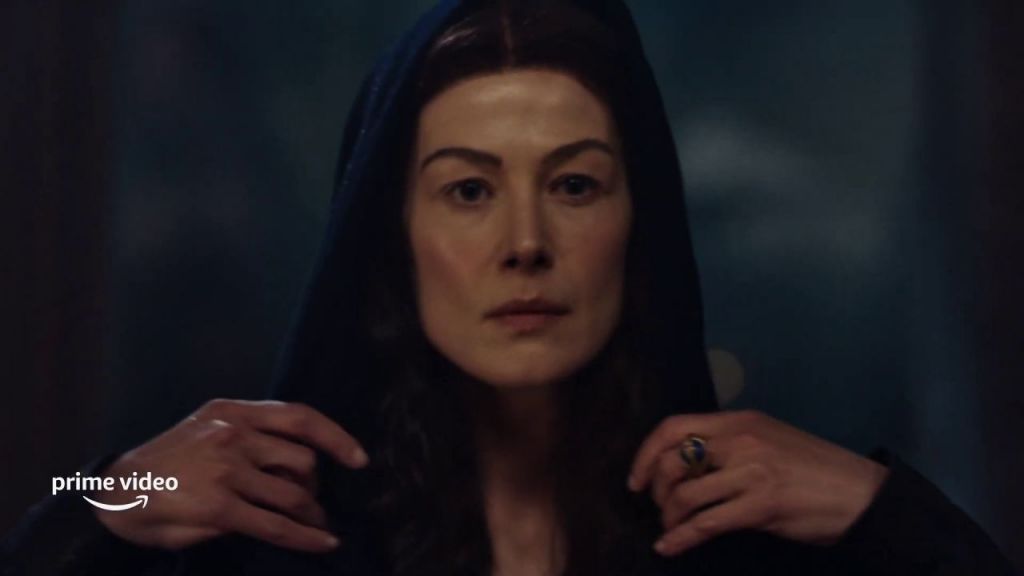 (Added, September 4, 12:30 am CST) And our final “finally”! Katysedai on Instagram noticed another detail I missed! In a Q&A with Rafe Judkins after the Moiraine teaser was released, Rafe said that “the moment Moiraine first walks into the Winespring Inn was the moment that really made me feel that true fan part of me make unintelligible sounds.” Katysedai says of the moment “It could be our first introduction to Moiraine, and I can’t wait to watch this scene in the show.” We see this moment 27 seconds into in the trailer, when Moiraine steps through wooden doors and then lowers her hood, Great Serpent ring visible on her hand.

This begs the question, with Aes Sedai rings so visible and easily recognizable in the show, will the Emond Fielders be able to recognize right away that Moiraine is an Aes Sedai?

What do you think? Did we miss any scenes from the teaser that can be linked back to previous leaks and teases? Let us know in the comments below!